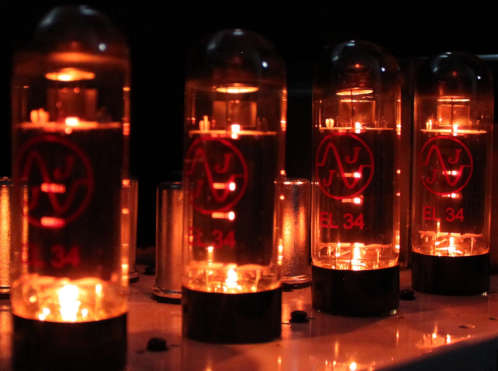 Making use of vacuum tubes for the purposes of rectification can itself impart a “feel” to the tone while playing. Different rectification tubes designs can impart more or less of this feel e.g A 5Y3 tube displays more whereas a 5AR4 tube does not. The reason that this phenomenon occurs is due to an effect called “sag”. Sag occurs when there is a dip in voltage as a result of higher demands for current (when the amp is working hard) and the inability of the rectifier tube being able to fulfil the requirement immediately. The sag phenomenon can also be triggered by filter capacitors of lower capacity and the internal resistance of transformers. The result of sag is that it effects the dynamics of the amp making it more responsive to guitar picking attack i.e. the amp becomes more expressive in that it compresses, sustains, notes bloom, lowers clean headroom and has delayed guitar attack.

Use of solid state rectification, on the other hand, imparts a more immediate and punchier feel to the tone.

Both types of rectification can impart a different feel to the tone while playing and are generally suited to different styles of playing therefore there is no better option. Vacuum tube rectification does however have a small drawback in comparison with solid state in that is costs more to build and can be less reliable.

Another characteristic, through the use of vacuum tubes for amplification, is the type of overdriven tones which are produced. Valve amps soft clip resulting in the addition of even harmonics at lower levels. The result of these even harmonics is the production of warm and rich tones which is more pleasing to the ears. Solid state amplifiers tend to add odd harmonics which are less pleasing.