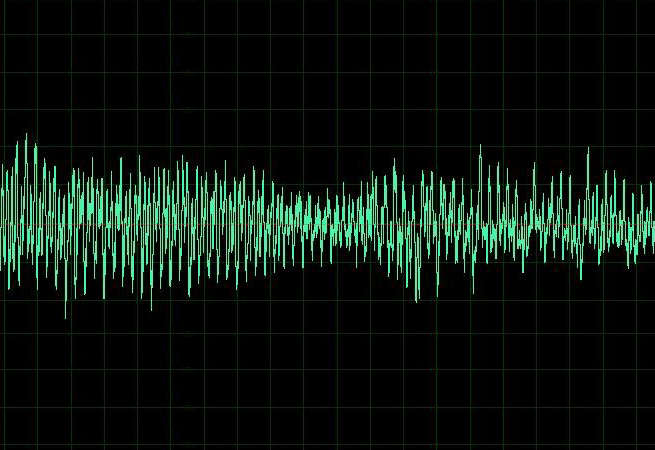 Hum is caused by the addition of AC mains power signal to the audio signal of an amplifier. The main sources of hum include AC valve heater powering, DC power supply ripple as well as electrostatic and magnetic coupling. This article will provide some insight into how hum is caused and what can be done to reduce it.

If grounds are not firmly connected to the chassis then this can either cause intermittent or a constant source of hum. If grounds are soldered then checks should be made to make sure that the joint which is soldered is strong, has no movement and no signs of cracks in the solder. Note that any soldering to the chassis requires a lot of heat due to the chassis acting as a large heat sink.

It’s also worth noting that the grounding point should be made on the bare metal of the chassis and not any shiny coating. This means that "roughing up" the surface may be required before making a ground connection.

Grounds which are mechanically attached using nuts, bolts and lock washers should also be checked for any looseness or bad chassis contact. If there is any sign of the nut being lose or the wire spinning freely then this will give rise to hum. It is important to use some form of lock washer to minimise the risk of the nut becoming loose.

Ideally, if using a ground bus scheme, there should be one ground which is located near the input stage. Full isolation of components from ground is often not possible therefore there may cause the introduction of ground loops e.g. many input jacks used for amps are metal and not isolated therefore allow more than one route to ground. It is possible to retro-isolate metal jacks by using isolation washers or replace the jacks entirely with non-metal grounded equivalents. In many instances the hum produced by not isolating jacks is negligible therefore not always required.

Ground loops in a circuit are a major contributor to hum. Ground loops can occur when more than one ground in a circuit are connected together and there is a potential difference between them. Examples of additional groundings in an amplifier include metal input and output jacks without isolation, potentiometers connected together by a ground wire, potentiometer tags soldered directly to the pot back. Hum will occur when there is a potential difference (voltage) between the grounds as well as different ground loops being in close proximity to each other and noisy current and voltages .

Hum or buzz can be caused due to sub-optimal placement of component along the ground bus. It is often good design and practice to place component ground connections close to the smoothing filter capacitor which provides them with the correct voltage. It is also good to provide a bit of distance between the power supply reservoir capacitor and other filter capacitors grounds to limit the amount of noisy current from the power supply bleeding into the rest of the circuit.
The main power supply can be considered as the Transformer (secondary HV wires including the centre tap), rectifier and reservoir capacitor. None of this circuit should be grounded as it will potentially induce noise in the circuit.

The diagram below shows the Fender 5F1 circuit with a single ground bus where the physical grounding is at the input jack socket. The jack socket is made of metal therefore will have direct contact with the chassis. For this type of application it is important to have a lock washer for the jack to make sure good contact is made with the chassis. 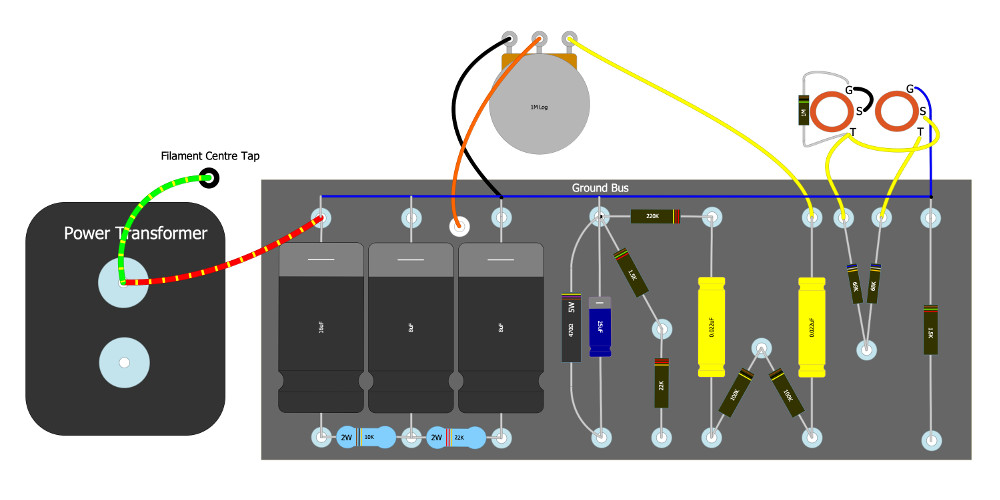 The diagram below shows the Fender 5F1 circuit with a preamp ground bus and poweramp ground bus. This keeps the stronger currents of the power amp away from the the not so strong currents of the preamp. Using this approach there is a requirement for two physical connections with the chassis i.e. preamp grounding is at the input jack socket and poweramp is at a chassis ground point. 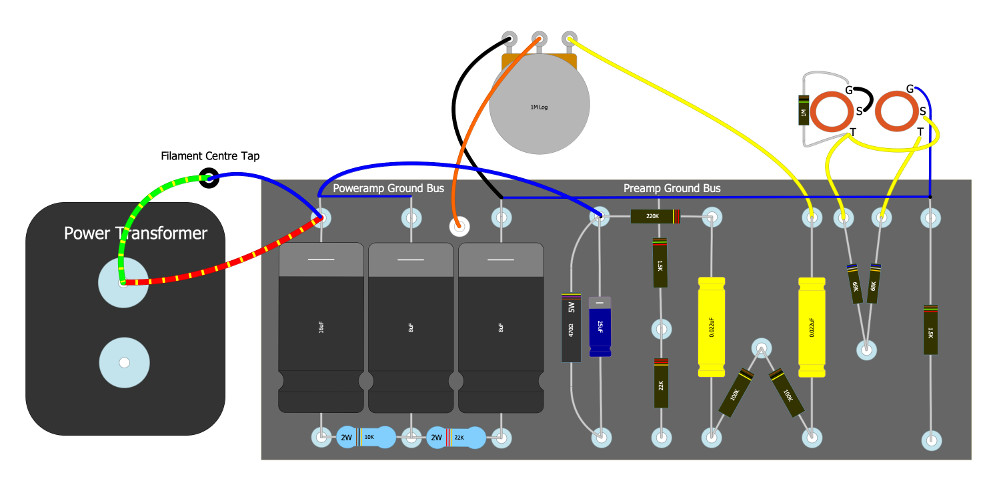 The diagram below shows the Fender 5F1 circuit with a single ground bus where the physical grounding is on the chassis near to the reservoir capacitor. Notice that the input jacks are are CLIFF type and are isolated from the chassis. This type of grounding guarantees that heavier currents from the filter section do not mix with any from the preamp section. 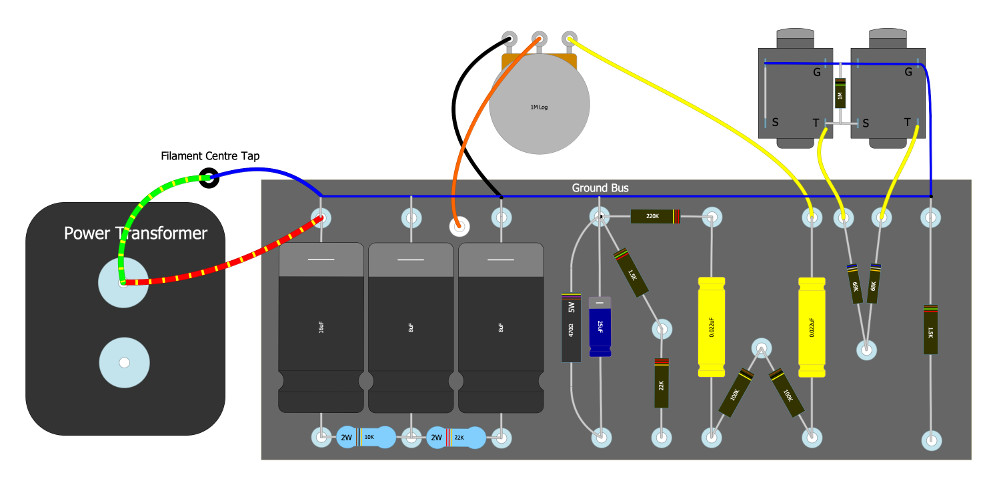 The AC 6.3v heater wires are known to induce hum in an amp circuit. This hum can be reduced by soldering the power transformer filament centre tap to the ground bus and if there is no centre tap then a virtual centre tap can be created by attaching one end of two 100 ohm resistors to the pilot light terminals and the other to ground bus. This can often be improved by lifting the 0v ground reference to a higher voltage and can be achieved by soldering the ground side of the centre tap to to the cathode of one of the power tubes in a cathode-biased amp.

The diagram below shows a virtual centre tap consisting of two 100ohm resistors located at the power amp tube and the ground has been lifted to greater than 0V. The second image provides a simple version of the centre tap where one side of the 100ohm resistors are soldered to the pilot lamp and the other side to a ground point. 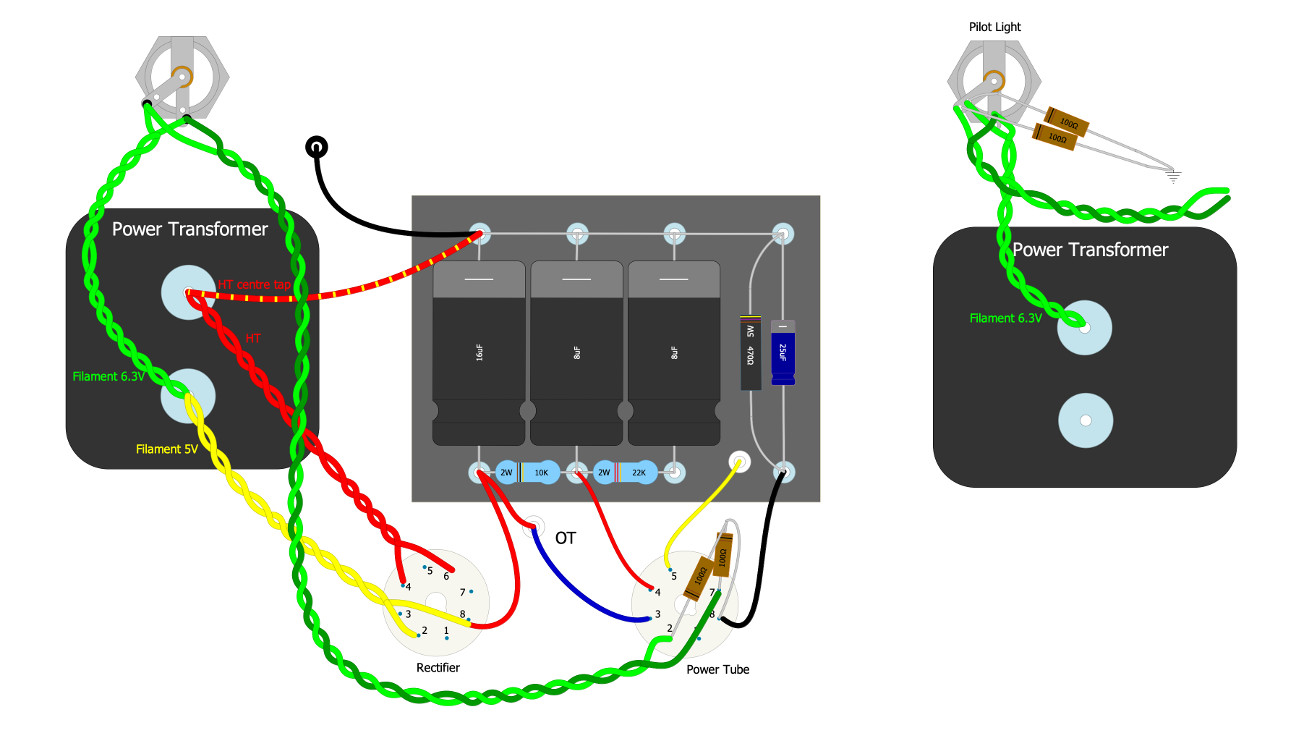 All AC wires hosted in an amplifier chassis create electromagnetic radiation which can result in hum in the audio circuit if not addressed properly. All AC wire should be tightly twisted so that radiated fields have a better chance of cancelling each other out. The actual twisted pairs should be kept as far away as practically possible from audio cables and components so as to not pass any EMF on. It is generally good practice to place heater wires tightly into the edge of the amplifier chassis. When this is performed make sure they stay far away enough from sockets and potentiometers.

Hum can also be caused by leaky filter or coupling capacitors. When this occurs, stray DC will get into the circuit and induce hum. This is more common with old capacitors but can occur to new too. It is quite often good practice to change old capacitors as a matter of course as the cost is minimal.

The amount of or lack of DC filtering can have a big impact on the amount of hum in a guitar amp i.e. lower level of LC / RC filtering will lead to DC with ripple and therefore more hum.
Early fender amps tended not to have as much filtering therefore were prone to hum. Types of amp also tend to exhibit more or less DC ripple induced hum i.e. Push-pull amps can tolerate more HT ripple because they cancel common mode noise. Single-ended amps are however more susceptible to HT ripple as they do not cancel due to the single-ended architecture.

Methods of reducing ripple include 1) Addition of a choke in the filtering circuit instead of a power resistor 2) Addition of a further node in the RC circuit to provide additional smoothing and reduce the strain on valve rectifier (if applicable) 3) Raising the capacitance, especially of the 1st capacitor, in the filter circuit. Generally screen and preamp capacitors are left alone so as to not impact tone. Additional capacitance on the reservoir capacitor may reinforce bass slightly.

The diagram below provides a visual representation of before and after addition of an extra filter stage. The key difference between increasing the capacitance in the reservoir capacitor and addition of a filter stage is that there is a full RC or LC stage prior to the output transformer DC feed. Not only does this help reduce the DC ripple being fed to the OT but reduces the risk of overloading the tube rectifier by keeping the reservoir capacitance value down. Choice of dropping resistor is very much dependent on how much DC is being dropped i.e. if more voltage drop is required then a larger value resistor is required. As an example, if the B+ supply is 370V, current is 40mA then a 250 ohm resistor will drop 14.8V (V = IR - 14.8V = 0.04 * 370) - the power requirement for the resistor will be (P = I²R - 0.4W = 0.04² * 250). For a power dissipation of 0.4W at least double that value should be used. 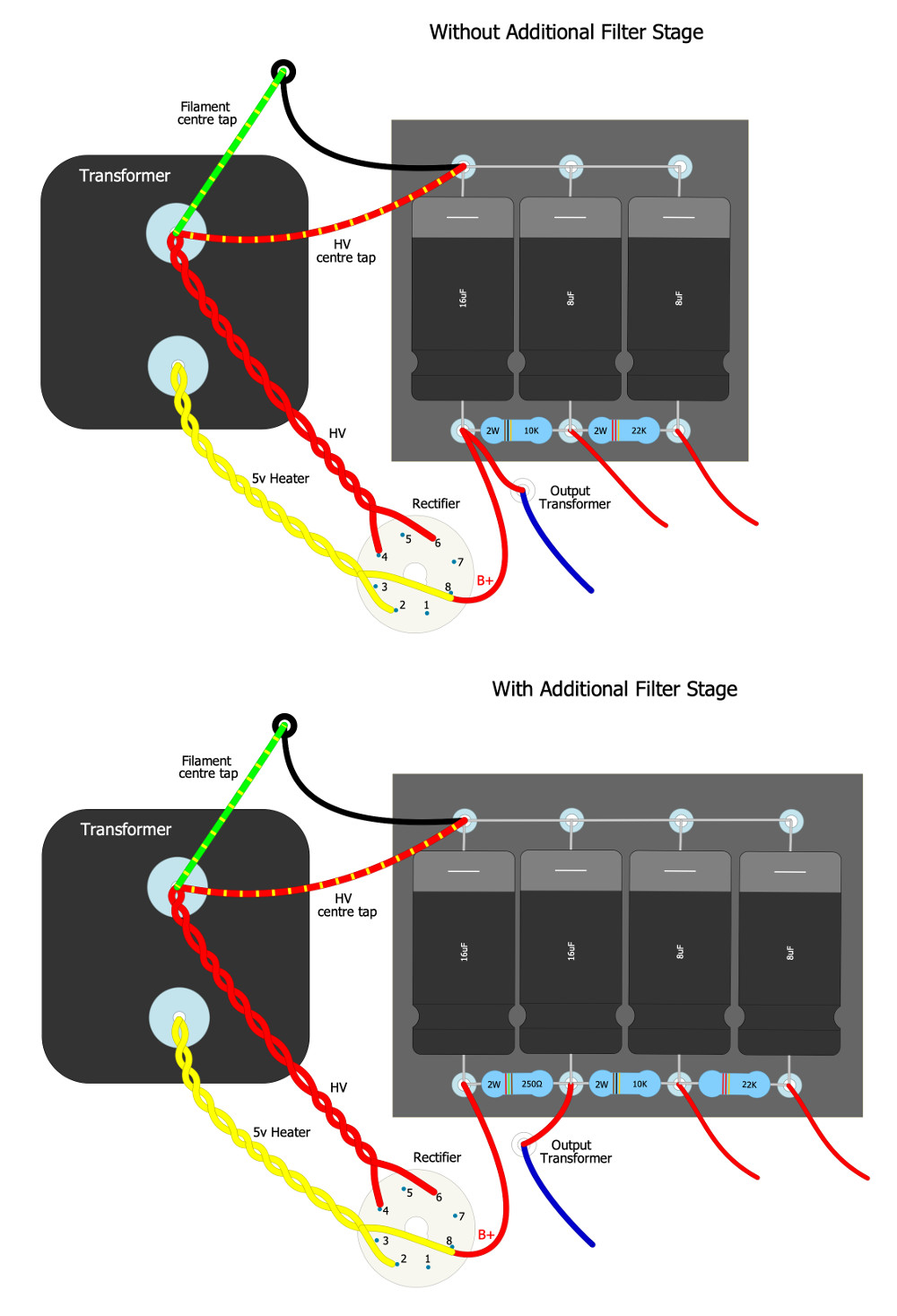 If the hum increases with volume level then the issue is likely situated in the signal path prior to the volume knob. This may be a result of a failing component, wiring, bad grounding or component picking up noise through capacitative coupling.

If the hum is unaffected by an increase in volume then the source of noise is likely to be located after the pre-amp section.

If hum still exists after removing all tubes (speaker still plugged in) then it is likely being caused by transformer coupling.

To test orientation of transformers undo bolts from one of the transformers and rotate up to 90 degrees to attempt to reduce affects of hum. Also increase the physical distance of transformers (be extremely careful when moving components with bare wires as high voltages are being carried).

Damaged or badly connected components can induce hum e.g. resistors with burns or cracks, capacitors with bulges or leaks. Any component showing any form of damage should be replaced.

Component leads can also induce hum due to damage or bad solder joints. Careful inspection of components and connections should be made.

Bad or lose grounding can induce hum. It is important make sure there are no lose connections or bad solder joints where grounds meet. It is also important to check that all ground connections to the chassis are tight (where bolted) or not cracked/lose where soldered.

In some cases grounding schemes can induce ground loops i.e. there is more than one ground point and those points have a different potential. Current will therefore flow and cause electrical noise.

If the amp is running with heater wires then make sure they are balanced i.e. the wires are centre tapped or there is a virtual centre tap.

Making use of a humdinger can have a better impact on reducing hum than centre or virtual centre tap due to winding imbalance.

When using a centre tap or humdinger the earth connection should be connected to an elevated reference voltage such as cathode of preamp or power tubes.

Inadequate DC filtering can result in noisy DC being injected into the amp circuit and inducing hum. A number of changes can be made to reduce DC filter induced hum. The first step is to make sure that none of the current capacitors in the filter circuit are faulty.

The second option is to replace one of the resistors in an RC node with a choke. A choke resists changes in current flow so is an ideal solution for smoothing DC ripple. It also benefits from not reducing the DC voltage as much as the resistor in the RC node would.